The Privilege of Pressure

Oftentimes a writer will be asked about her process, and usually the answer involves something along the lines of, "I outline religiously, write a draft, go through it for X,Y, and Z..." etc. Or it can be summed in one word, "I'm a pantser" (writes by the seat of her pants) or a "planner."

Mine can be classified similarly as "a hot mess."

Or, my process is I have no process, only a collection of activities that eventually become a finished book. I write scenes out of order, (usually sex scenes first to see how the characters are with each other and... because sexy times)...

I outline, and then despair that my outline is hopelessly unworkable; I notecard in an effort to categorize scenes for importance; I type or dictate depending on how badly I'm behind, and eventually a book is cobbled together with lots of love and best intentions and held together with a strong adhesive of sheer panic.

Honestly, my editor does double duty as a therapist, getting me through those rough days where EVERYTHING IS SHIT and I just want to quit.

I wrote my first romance novel in 2009, expanding a flash story from a writing contest into a full-fledged book. Then I tucked it away for 5 years. I don't know what prompted me to expand it into a novel, nor why I ignored it for so long. Probably because I was a stay-at-home mom raising two little girls through those tough early years, far away from family to help, and bogged down with sleep deprivation.

In 2014, I emerged from the fog of sleeplessness, cleaned up the book and published it with no fanfare, no marketing plan, no nothing. I told my friends and family and they dutifully bought their copies....And that was sort of it for awhile. I had nothing to lose and my biggest fears were negative reviews. There was no pressure. No readership (aside those loyal friends and family) to impress, and...

It was a glorious time, in many respects, as I quickly moved from worrying about negative reviews to wanting any review, and learning that I had a lot to learn about the business. I wasn't worried about sales (lucky thing, that) since it was pretty obvious from the get-go that there was a lot more work I needed to be doing, and refreshing my Amazon page every other minute was not it.

Shortly after my second book I received a question from a reader on Goodreads, "When would you consider yourself a successful author?"  This was my answer:

I think "high sales" is the easy answer but not necessarily the whole one. For me, I'd consider myself successful when I had a core group of fans who really enjoyed my books, my characters, who had lively discussions about the various plots, or who looked forward to a book being set in a particular city, or who cast the books with their own ideas of who the characters were.
Second to writing, I love talking *about* writing, so success to me would be having fans who were really invested in the stories in some way. How many fans or how many books they bought is sort of second to that. :)

That was written at a very early time in my career and sometimes wonder if it was a naive thing to write, as my ambitions extend pretty far and wide as to where I want to go in this industry.

But the essence of the answer is 100% completely true. I've achieved what I hoped for when I answered that question. I have an amazing bunch of readers who support me and my work beyond anything I'd ever hoped for. They are invested, and that is a gift to me.

And because I love staying close to my readers, many are highly aware of my HOT MESS process, and how I stress out and get neurotic, with posts and comments I make on my author page or fan group, to the point that they're probably over it.

But the struggle is real. Since that first novel that I blissfully drop-kicked into the sea of ebooks, my nerves and anxiety ratchet up higher and higher with every book I write. I thought How to Save a Life would kill me, and the reason, I learned was that those expectations weren't so low anymore. At least not to me. So many readers loved RUSH (and Noah), and were so looking forward to what I did next, that I felt this tremendous pressure to not let them down, esp since HTSAL was a little different plot-wise.

HTSAL did quite well. My biggest hit, if I'm being honest, and so the anxiety jumped up as I prepared to release a novel--Full Tilt--with no conventional HEA. Then it rocketed to stratospheric heights with All In. Readers loved Jonah so much, that the idea of taking Kacey from him to Theo believably, honestly, and without leaving Jonah behind was a massive challenge. I woke up every single morning with anxiety twisting in my guts.

It took my editor/therapist, Suanne Laqueur, and Robin Hill--she of the miracle emails--to drag my ass out of the Pit of Despair and keep going. to stop second-guessing every damn word, and just put out What Happened with Kacey and Theo. I did, and by some miracle, the readers--by and large--feel as if I've accomplished what I set out to do. Huge sigh of relief, to say the least.

But after every book I publish I vow to not let the anxiety get me, and every time it does. (no doubt enhanced by the fact I play chicken with deadlines). So I started to wonder how I might avoid such panic next time around.

Short answer:  stop playing chicken with deadlines and give myself some breathing room. Granted, Real Life intervened quite spectacularly around the time of All In, but even so.. 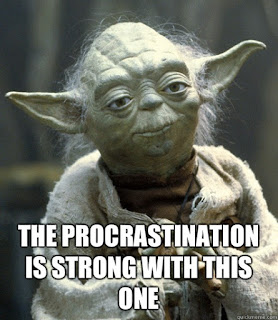 But Full Tilt wasn't rushed at all and I still had ridiculous amounts of anxiety, and I wondered if that was normal. Does every writer freak out like this? I suspect the answer is yes to greater or lesser degrees, and they're just better at hiding it. But it didn't make me feel any better about it until one night I was watching Sunday night football.

Colts' QB Andrew Luck was asked about the $129 bazillion dollar contract he just signed, and did that made him feel as if the pressure was on more so than before? He said no, the pressure to perform was about the same because every game counts yadda yadda. But then he threw an offhand comment about a coach who told him that pressure is privilege. That it means there have been accomplishments that one wants to build off of. That there is something at stake.

When I hit publish on my first book, there was nothing at stake. No name, no readers, no sales stats to compare to. And yes, it was fabulously stress-free. But I would not go back to that kind of stressless existence if I had a chance, becauseI realize now that crazy-ass pressure is a privilege. It means there is something at stake where there hadn't been before.

To be clear, the pressure to do right by my readers doesn't come from my readers. They are patient and overly generous with support. It comes from within, and is there for a good cause. It's a kind of gift that people are waiting to see what I'll do next and I if they're paying for the book, it had better be my best effort, stress and all.

Pressure is privilege, and the day I start cranking out a book and not giving a shit how it lands, or just for a sale is the day I need to start looking at doing something else. Like this, maybe.

All In is Live! 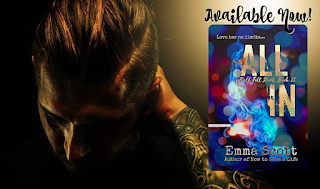 "I am overjoyed and my heart is beyond happy. This is a Masterpiece! One I will never forget!"-- AC Book Blog
*
"All in was a wonderful conclusion to one of the best duets of the year...This story of finding love and happiness after suffering the most painful of losses was truly beautifully written."--Aestas Book Blog
*
"This story had moments that were devastating. It also had moments that brought me hope and gave me peace....I was in emotional overload and I loved every second. " --Christy Baldwin, top Goodreads Reviewer
*
"Perfection! 5+++ stars! The author did everything right with this story. Nothing was rushed. All of the stages of grief and the complex emotions the characters were feeling,  were well developed and she did an amazing job at not only articulating them, but actually making the reader FEEL them."--More Books Please
*
"The development of their relationship is stunning, heart-wrenching and devastatingly beautiful. It's a deliciously slow burn and you can't help but root for them."--Vanilla and Spice Books
*
"Three words to describe this book: Empathic. Fluid. True...There was only one way to have written this story and that Emma wrote the heck out of it. It, simply, was perfection." --Bibi, Top Goodreads Reviewer
*


"Everything about the two of them just felt so real. What an absolutely amazing and beautiful story about loss, friendship, love and moving on." --Three Chicks and Their Books

Amazon US: http://amzn.to/2eno13MAmazon Universal: myBook.to/EmmaScottAllIn
Posted by Emma Scott at 10:15 AM No comments: