How to Save a Life Cover reveal

How to Save a Life

Hey all, here is the cover to my newest standalone romance, releasing February 9, 2016!

Josephine Clark is trapped. A harrowing past haunts her every time she looks in the mirror, and she can’t escape the violence of her everyday life. More and more, her thoughts turn to Evan Salinger, the boy she knew in high school. The boy they called a mental case. A loner. A freak. The boy who seemed to know things no one could know. For a few short weeks, Jo had found perfect solace in Evan’s company, sneaking every night to meet him at the local pool. In the cool of the water and the warmth of Evan’s arms around her, Jo had tasted something close to happiness.
Cruel circumstances tore them apart, and four years later, the sweet memory of their time together is dissolving under the punishing reality of Jo’s life now. Evan seems like a fading dream…until he reappears at the moment she needs him most. Guided by Evan’s strange intuition, they flee her small Louisiana town, running from police and criminals alike, and Jo begins to suspect there is something more to his sudden return than he admits.
Over twelve days across America’s heartland, deep secrets come to light, buried pasts are unearthed, and the line between dreams and reality is blurred as Evan and Jo fight to hold on to their soul-deep love, and discover that there is more than one way to save a life.
How to Save a Life is a complete second-chance STANDALONE novel with some shades of the paranormal. It carries the characters from high school through to their early twenties. It is not YA; mature subject matter and sexual situations. For readers 18 years and up.

preorder link: http://amzn.to/1Jsb9OJ
And I am giving away a brand new Kindle Fire as part of the cover reveal!
Enter here: http://bit.ly/1JALOC5

Excerpt: “I didn’t do that so I could get something in exchange. You don’t owe me anything. That’s not how this works.”
“How what works?” I asked in a small voice.
“Us.”
I felt shy and unsure and completely exposed. More than even when he was between my thighs, kissing me to oblivion and back again.
"So this is us?" I asked.
“Yeah,” Evan said, cupping my jaw. He swallowed hard. “This is us.”
I felt something break open in me. I wanted to cry. I laughed instead, and threw my arms around his neck, driving us both under the surface. I kissed him and tasted myself on his lips, and his own sweetness before the chlorine water washed it away.
We came up laughing and sputtering, my hair in my eyes. Evan raised both hands and brushed the long, dark locks from my face…and from my scar. I held still, letting him do this, letting him see me, and he smiled.
“You’re so beautiful,” he whispered, and kissed me long and hard, and I sighed into that kiss, into his body, into him. I wasn’t beautiful, not anymore, but it was still nice to hear.
“I know you don’t believe me,” Evan said, his words echoing my thoughts with uncanny precision. “But it’s true.”
I felt myself turn rigid, ready to pull away, but Evan wouldn’t let me. His arms slipped under mine and around my back, drawing me toward him. He raised one hand to my scar, his fingers soft and gentle, and warm over the lightning crack that marred my cheek.
“The Grand Canyon was carved by a river. It sliced through the rock, revealing layer upon layer of beauty, and a depth that couldn’t be seen until it was cut open. One little sliver of water…”
“Evan…”
“One little sliver.” He traced the ragged seam down to my chin. “The majesty of the Canyon is that depth; that beauty, buried for years, until the river cut it open, revealing everything.”
I felt tears sting my eyes and pressed my cheek into his hand. “Don’t,” I whispered. “I can’t take it.”
"It's okay, Jo." Evan smiled gently and pulled me to him. “It's okay.”
No, it wasn't okay, but he didn’t fight me or try to force it on me. Years of feeling ugly couldn’t be erased with a few poetic similes. But he was here in my arms and I was in his, and the way he looked at me…I could almost believe what he was saying was true, and that was good enough for me. 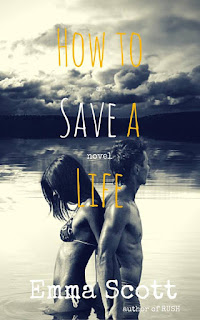 Posted by Emma Scott at 9:00 AM No comments: