On Marvel's Daredevil...This is Great Storytelling

I'm a comic geek. Not huge; I haven't mentally categorized every Marvel comic book with encyclopedic skill, but enough so that when I'd heard Netflix was going to make its own Daredevil series--I was pretty excited. I was even more excited, in a purely--ahem--aesthetic level, to learn that Charlie Cox would play the super hero. (Owen Slater of Boardwalk Empire fame, and departed too soon--but then, didn't they all?)

In brief, for the uninitiated: Daredevil is about a man named Matt Murdock, a Hell's Kitchen native and son of a B-list boxer--a man who took more punches than he gave. At the age of nine, Matt saves an old man from being hit by a truck carrying barrels of radioactive chemicals. A good dollop of these chemicals hits little Matt in the eyes, rendering him blind, but also heightening his other senses to stratospheric levels. A kung fu master (and fellow blind man) teaches Matt to fight and use his abilities, which Matt then puts into service by beating up bad guys in his beloved Hell's Kitchen at night, while working as a defense attorney with his college pal, Foggy Nelson, by day.

I didn't have many expectations, though Netflix seemed to be on a roll with House of Cards and Orange is the New Black, so I prepared for some good ole Marvel-comic-book-snappy-Guardians-of-the-Galaxy-style smart-alecky pop-violence (where people get beat up but you don't see any real blood). Or, more likely, a reboot of sorts of the terrible Ben Affleck movie (not terrible because of Affleck, but terrible in the same way the Clooney Batman movie was terrible--its cartoonish approach and vision.)

Daredevil is, in my opinion, a masterpiece of storytelling. The show-runners stripped away all the gimmicky b.s. that can infect even the best franchises, and left us with the nitty gritty. More Batman Begins than Batman and Robin, to say the least, but even more raw and bare than BB. Matt Murdock is not trying to save the world, or even all of New York City. He's out to clean up one neighborhood, Hell's Kitchen. He has incredibly heightened senses but instead of some cartoonish display of sonar, we are treated to small doses of him listening to heart beats, or intakes of breath, or the sound of an enemy's weapon scraping against the concrete. We never see what Matt "sees" but once, when he's recounting how all of his senses work together to form a whole he describes it thusly: "A world on fire" and if that doesn't give you shivers...

Matt wears all black, but no super hero costume--not right away--and so gets the shit kicked out of him as much as he delivers. He's human. He bleeds. A lot. But he keeps fighting. As his dad taught him, it's not about getting knocked down, it's how you get back up that counts. And the fights themselves are miniature masterpieces of hand-to-hand combat not seen too often in this day and age of guns, lasers, and magical hammers.

Often using extended tracking shots, and shot in dim, dark lighting, the fight scenes are brutal, raw and real, with lots of broken bones. No one defies gravity or flies across rooms. The fighters make mistakes, they breathe heavily, they take pauses to muster their strength for round two without every breaking the kinetic spell of the dance. It's a joy to watch insomuch as guys beating the snot out of each other is a "joy" but I appreciate them for the effort and choreography that are put into each one. We're not seeing variations on the same punch-kick-punch. We're also getting a visceral sense of how painful and exhausting it is for Matt to fight crime this way. He abhors killing (and doesn't do it). He hates guns. He believes in justice. His night-time hunts against child traffickers and arms dealers are that much more intense, with more going on, than a bunch of people shooting at one another and our hero barreling through them in a suped-up hot rod. There's more at stake, for while Matt has superhuman abilities, you never forget that he is, essentially, a blind guy throwing himself at hordes of organized criminals that have infected his beloved neighborhood.

The casting of every character is another reason Daredevil rises above the fiction to create real humans living their stories. They are wonderfully cast, seemingly with an eye toward interesting faces that might have been pulled straight out of a comic book artist's imagination. Wesley (Toby Leonard Moore) is Fisk's first in command, and is a paragon of cool, smarmy efficiency behind his elegant glasses. Vondie Curtis-Hall plays a seen-it-all reporter who wears his weariness for fighting the good fight against impossible odds in every craggy nook of his face. Rosario Dawson is a nurse/love interest to Matt, and plays her internal conflicts so beautifully, you can practically read her every thought. And these are the minor characters.

The leads are just as good.

Karen Page (Deborah Ann Woll) is the brave--but smart and rightfully cautious--third party in the Nelson/Murdock law firm, who seeks justice too, but is refreshingly free of the smart-ass, "spitfire" heroine trope. Her courage is real, but so is her fear and vulnerability.

Foggy Nelson (Elden Henson) is the perfect doofus/comic relief sidekick--or so you think--until the episodes unfold a real depth of character that goes well beyond one-liners. Episode Ten, in which we flashback to Matt and Foggy's college years is nigh perfect. Intercut with Foggy learning Matt's vigilante identity, it is a masterpiece of revelations. It shows the founding of Matt and Foggy's camaraderie and friendship while simultaneously--and heartbreakingly--tearing it down as Foggy feels betrayed by Matt's double-life. Not since the Richard Harrow/Jimmy Darmody of Boardwalk Empire have I seen this level of true male friendship: deep and real and unabashedly emotional.

Kingpin is the Daredevil villain (though we don't hear that name right away in the same way no one calls Matt "Daredevil" straight out the gate). His real name is Wilson Fisk, a huge, bald, towering monster of a man who is also...not entirely a monster. Daredevil is too smart a show to render Fisk a stereotype of badness. We see him alone, lonely; we see his flashbacks as a chubby child with an abusive father. We hear his ideas for cleaning up Hell's Kitchen, for though he kills the innocent to get what he wants, his intentions are not that different from Matt's. And Vincent D'Onofrio is the actor who pulls this off brilliantly, making Fisk simultaneously scary as hell, but also a guy you empathize with, on some level. D'Onofrio, probably best known for Full Metal Jacket, is one of those crazy-good actors who don't do things the way you think they're going to do them. Fisk is a mess of insecurity, violence and growling intimidation, in short: a real person doing bad things for what he thinks are the right reasons.

And Matt Murdock himself, Charlie Cox, with his low, velvety smooth voice and calm-on-the-surface demeanor is a thrill to watch and root for. He's tortured but not so much that we're bombarded with tortured angst every other minute. He's charming, sweet, noble...and also ready to pummel the hell out of the bad guys for ruining his neighborhood. His conflict, contained as it is, comes out in conversations with his priest, with Claire (Rosario Dawson's nurse), or in the violence of his street fights. But when he's in his normal clothes in the light of day, working in his start-up law firm, he comes across as an affable good guy--a blind man who conceals his unbelievable talents behind an honest humility and complete lack of superhero ego. He's just a guy trying to do a job, and that sensibility drives the show in every aspect. Defines it. Strips it of pretense and takes risks by letting the characters drive what would seem, on the surface, an action show.

And the result is truly breathtaking. 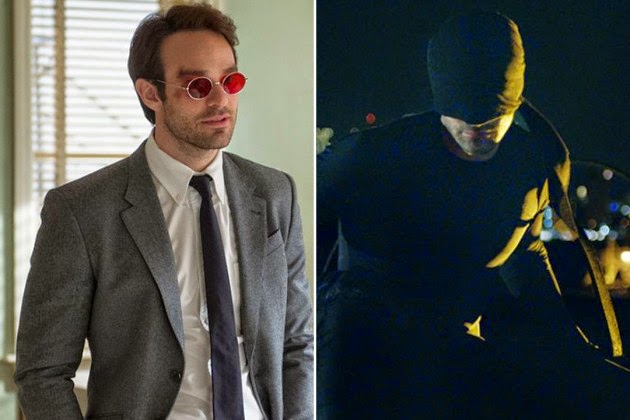 “Help us! Help him!” I screamed again, and could have wept with relief as officers started my way. “You’re going to be okay,” I told Cory. “You’re going to be just fine.”
Cory’s response was to slump against me heavily, his head lolling to the side. His breath had quieted to the barest whisper.
“No! Cory, wake up!”
No response. His eyes were open halfway, glazed with pain, and his mouth worked silently as he struggled weakly to draw breath.
Then I found myself in a sea of legs as S.W.A.T. and medical personnel surrounded us. They took Cory from my clutching arms and bent over him, working frantically. An officer knelt beside me and asked me questions but I hardly heard him. I just watched, horror twisting my heart, as an EMT opened Cory’s shirt and jabbed something into his chest. Blood spurted and Cory gasped, jolting upright, and then sinking back down, his breath deeper now.
“Alex…”
I shoved my way through and took his hand in my bloody ones, trying not to stare at the instrument—that looked like a pen casing—jutting from his right pectoral.
“I’m here. I’m right here.”
He smiled faintly and then winced in a soundless scream as they lifted him onto to a gurney. They raised the head so that he was partially upright, while another EMT bent him forward to staunch the wound in his back. Then we were moving. I jogged alongside into the morning sunshine for the first time in four days, and then into an ambulance.
It seemed the blood would never stop flowing. Blood from behind Cory, blood leaking around the tube in his chest. They put an oxygen mask over his mouth and that became stained red as he coughed.
I clutched his hand tightly, so tightly. “Please don’t go,” I whispered. “Please stay with me. Cory, please. Stay…”
He wheezed for breath. It sounded so labored and thick with blood. His dull gaze landed on our entwined hands and his lips curved up ever so slightly, a weak version of his crooked grin.
He held on.
Weakly, struggling, in agony, he held on, drawing upon the great reservoirs of love and bravery I knew he possessed. He held on for his little girl. For his father.


And I liked to think that maybe, if only a little, he held on because I refused to let him go.
Posted by Emma Scott at 10:10 AM No comments:

My interview with N. West Moss!

Interview here
Posted by Emma Scott at 10:41 AM No comments: